skip to main | skip to sidebar

I looked back at the earlier posts yesterday and realized there were some great comments that went with them. I'm glad to see the interest in grains on smaller farms is strong. I've recently been reading the Eatwell Farm Blog. Nigel grew a bunch of wheat this year to feed his chickens because the price of grain has been so high. Maybe those high prices, along with the continued demand for local, quality food will encourage more growers and that will in turn make appropriately sized equipment more accessible.
My experience with growing and processing grains is on a much smaller scale than Anthony's, usually small test plots in the 100 sqft range. I haven't managed to justify jumping up in scale on valuable vegetable land for a crop that might only be worth a fraction per acre of any other crop that we were growing. My biggest temptation was to grow cover crop seed, since we buy in quite a bit and it's hard to find organic sources. I also figured it wouldn't take that much space to set aside a bit of the cover crop I was growing anyway and let it fully mature - even thought that's probably a full two to three months longer the field would be out of vegetable production.
In my experiments with growing grains and beans and other seeds I have collected a few resources and I thought I'd share them here and encourage other folks out there to submit their own articles to the blog.
I'm sure there must be more good books out there than just this one, but the most general, scale appropriate book I've found is Gene Logsdon's "Small - Scale Grain Raising." I don't believe it's in print anymore but if you can find a copy it's a great overview of a number of different grains and legumes, equipment for growing them, reasons for growing them, and ways to use them. The book is focused mostly on the homestead scale, but a lot could be transfered to small scale production and the basic information for a vegetable grower like myself is useful. There is quite a bit of information on feeding livestock as well as growing grains for human consumption in the book.
Carol Miles at WSU (http://sustainableseedsystems.wsu.edu/nicheMarket/index.html) has good information on growing dry beans. There are plans for a thresher and a cleaner that are motorized but very small scale and relatively inexpensive. The thresher is a modified garden chipper/shredder based on Alan Dong's design. I have Rotohoe chipper/shredder, the one suggested for modification, and I have used it, completely unmodified to thresh wheat, hull-less oats, rye, vetch, dry beans, chic peas, spinach, and other seed with good success. The model I have has L shaped blades that are fixed. I have friends who have a model that has straight flails. They did the modification, ganging the straight flails together, and run a lot of dry beans through it. They have had problems with beans shattering if they are too dry and the machine clogging if the plants are too wet. We both run whole plants through the machines (without roots). 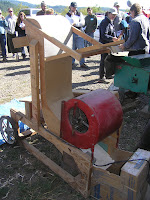 I've seen the WSU cleaner in action and it is a little simpler to operate than the box fan and tub method than I use, very simple to fabricate as well. For smaller seeds, some folks from Bejo Seed were showing a similar set up to the WSU cleaner at the Organic Seed Alliance conference a few years back. Their model was built with a blower fan and clear plastic pipe and fittings, maybe 2". They were actually using it for separating different density allium seed but for smaller beans, or grains, and smaller volumes, the pipe might work better than the larger plywood and sheet metal version that WSU shows. The clear plastic was great for demonstrations, and for adjusting air flow since you could see everything that was happening inside.
Alan Dong also has a design for modifying a Corona grain mill to a grain huller (http://www.plantsciences.ucdavis.edu/LTRAS/Itech/thresh.html). I don't have any experience with this design but it looks very straight forward, kind of like a small belt thresher in some ways.
As the summer progresses and there's more seed threshing and cleaning happening I'll try to get some photos and maybe even video of these tools up on the blog. If anyone out there already has good shots I would love to see them.
Posted by Slow Hand Farm at 9:27 AM 2 comments: